A Rough Night for Lindsay and Nicole 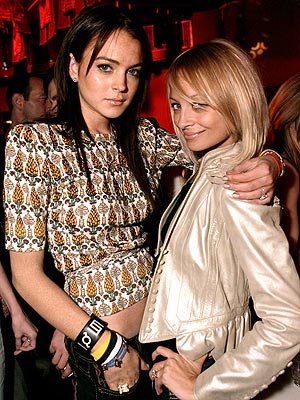 It’s been a rough weekend for Nicole Richie and Lindsay Lohan. Late last week, Richie checked into a treatment facility to determine “why she’s not been putting on any weight.” We in the gossip blogging community are proud to announce that we quickly helped her doctors solve that little mystery, because Richie was out and about on Saturday night, partying with Lohan.

Whatever Richie was ingesting that night (we’ve ruled out food) didn’t sit well with her, because she passed out at Hollywood club Hyde around 2 am on Sunday. The club manager wanted to call an ambulance, but Richie’s friends insisted they would take her to a hospital themselves, carrying the celebutante out the back door.

Lohan didn’t fare much better. She was spotted sitting in her car at 6:45 Sunday morning, convinced that the paparazzi tailing her were trying to hit her car. She seemed “out of it” and looked as though she’d been crying. My guess is she wasn’t driving to an early-morning mass after a good night’s sleep.

All this comes as News of the World releases an exclusive interview with Lohan, in which she talks about her battle with anorexia and bulimia. She discusses a night in 2004, where she feared for her life at the house of then-boyfriend Wilmer Valderrama. “I felt so sick,” she said. “I lay down on the bed and started getting these shooting pains. I was screaming, throwing things, because the pains were so intense in my head.” Regarding ex-boyfriend Harry Morton: “I have only been in love once and that was with Wilmer.” Ouch.

Joking aside, I hope Nicole and Lindsay become willing to take the actions they need to get healthy again. Come on, girls! Look at Courtney Love. You can still do strange, obnoxious, publicity-generating things — and we’ll still make fun of you — just do them sober.