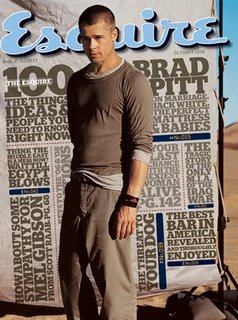 Don’t get me wrong: I’m still mad at Brad Pitt. When he walked out on Jennifer Aniston, I felt like he took all my fairytale-marriage-to-Brad-Pitt dreams along with him. You’d think they would have evaporated when he married Jennifer Aniston, and, consequently, not me, but somehow they persisted still. Like I could have my fairytale marriage to Brad Pitt through Rachel Green. I soaked up every minute of our power-couple union. What kind of person operates in such a distorted, delusional reality? I’ll tell you: it’s the same kind of person who writes a celebrity gossip blog.

So when he left us for that whorecake of a U.N. Goodwill Ambassador (that’s not even a real ambassador, I’ll have you know), I was pissed. It was totally uncool. I felt jilted, betrayed. I was mad at him.

Then he shows up on the cover of Esquire looking ridiculously hot and broody, and what does he say about his relationship with Captain Whorebreath?

“Angie and I will consider tying the knot when everyone else in the country who wants to be married is legally able.”

And when you set aside the fact that Brad Pitt just boldly advocated polygamy and child brides to a well-respected men’s publication, it’s really a very nice sentiment, and I may take his photo off my dartboard, just for this week.