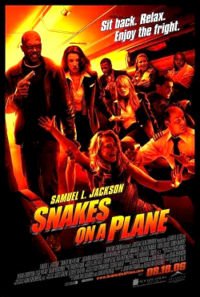 But this one’s out of the ballpark. I love this girl. Since blogs began to replace mainstream news media for most of the sub-30 set, we’ve lost touch, I think, with the blogs of old — the sordid life stories teenagers swapped on DearDiary.net, before we even called them “blogs.” It’s refreshing to see someone write a blog as a diary again; I commend her for putting herself out there for our voyeuristic pleasure.

Although I am fairly convinced the seemingly genuine excitement surrounding all things Snakes on a Plane is just the whole country teaming up to play a trick on me. At first I thought maybe people were into it in a so-bad-it’s-good kind of way, but then I realized they were serious. People are totally psyched for this movie. I don’t get it. I so do not have my finger on the pulse of this country.

Update: Okay I lied. This is genius.