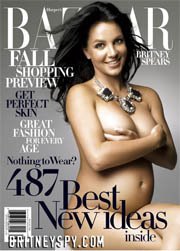 Does anyone else feel betrayed by her lately? Maybe it’s just me. I used to feel such a kinship with her. When she first came out with “…Baby One More Time,” the great unheralded domestic abuse diatribe of our generation (I would pay a great deal to hear the Tori Amos cover), I felt she was overrated and overexposed. It was nice to see that the oft-ignored ellipse had finally forced its way into that inpenetrable fortress of pop culture, but beyond that, I felt the song was catchy but otherwise unremarkable. But Britney kept at it, and to some extent I found a place for her in my heart. When she released “Oops!…I Did It Again,” I cringed with the rest of the grammar cognoscenti, but I related. I was 19, like Britney, and had suffered my share of heartbreak. I had done it again, I had become caught up in the game, &c. I felt we were really growing up together — like the way my mother developed an obsession with Princess Di when they were pregnant together (my mom with me, Di with my betrothed, Prince William) — Britney and I were facing young womanhood head-on, side by side. We were in this together. She had my back, much like Lil’ Kim and Christina Aguilera would down the road. “I’m Not A Girl, Not Yet A Woman” really sealed the deal for me, because, YES, Britney, I was not a girl anymore, but I was not quite yet a woman. It was a tough time. I understood you. The Justin break-up was real rough, but I was there with you. I fought tooth and nail for ya, Brit. I was even with you through the Kabbalah, Brit, as a fellow Jew-when-it’s -convient, even though I could have told you from the start that Madonna was Bad News Bears. She only wants you when you can help her career. You should have known that. I would have told you. She’s on to Lohan now. So sad.

When you married Kevin, I stood up for you. True love knows no social barriers, Brit, and he clearly had weed hook-ups that money can’t buy. You can’t help who or why you love. I would have advised against “Chaotic,” but if you needed the whole world to know you’re a stoner, hey, that’s kind of like Step One, right? I backed you up. It must be hard to grow up in the spotlight, and you were doing the best you knew how. I was right there with you.

Then you did this, and the whole world realized that Leslie Sloan Zelnick was not as overpaid as we’d previously believed. (Rachel Zoe still is. Please, Rachel, get Lindsay out of the leggings and ballets. No, not later, right now.) Britney, sans publicist, make-up artists and hairstylists: you are a moron. You can take the girl out of Kentwood, Brit, but you can’t take the Kentwood out of the girl. You are a gum-smacking, kid-birthing, hick-fucking, algebra-failing, Grade-A moron when left to your own devices. You don’t make any sense. You ramble like an drunk. You air-quote everything. You twirl your hair. It is truly crushing. I’d bought into a manufactured image of you, and I was so disappointed when it all came crumbling down. I don’t hate you; I’m sure you are genuinely trying to do what’s right by yourself and your family, but you are so painfully misguided when it comes to the execution that it’s difficult to watch. You are infinitely watchable now no longer as a rock star but as a trainwreck. It’s really too bad, Brit.

You’re like the guy I never wanted to date in the first place, but he was so confident; he was so sure he could offer me everything I ever wanted, so in-my-face, pushing his product every way I turned; I gave in and said yes. I bought into the hype. You both broke my heart. But it’s okay, sweetheart. I forgive you both. I will toss aside my Britney Spears Life Guidebook, pick up the new Christina Aguilera album, and trudge forward, discouraged but never without faith.