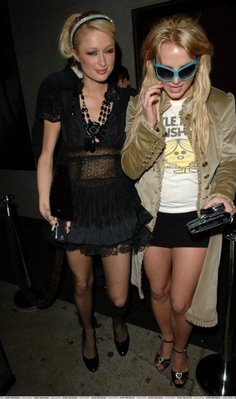 According to the NY Daily News:

Spears was snapped with Hilton on Friday night leaving West Hollywood’s Hyde nightclub in a white T-shirt and black mini-skirt (both very Hilton-esque) as well as a pair of Paris’ trademark oversize sunglasses.

While maneuvering out of the cab in the black mini, Spears managed to flash her goods to the throng of paparazzi – and there was an awful lot to see.

I have a feeling the pictures are here, but I can’t get the page to load. Will keep you posted…

The point this really drives home for me is just that Paris Hilton is (still) a goddamn publicity genius. Britney Spears is going through one of the most high-profile divorces of the decade? Be her best friend. Get her trashed. Make sure she doesn’t wear underwear. Be with her when crotch shot is snapped. Just brilliant.

Update: Wow, that wasn’t even the worst of it. The world premiere of Britney Spears’ labia, here.