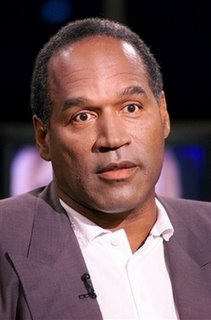 Mr. Orenthal James refuses to disappear into obscurity, and, if that means he has to keep bringing up that whole yeah-I-killed-my-wife thing, then that is what will happen. Honestly, can someone just take one for the team and give this guy a movie role already?

According to the AP, Fox plans to broadcast a two-part interview with Simpson in which he will regale us all with tales of “how he would have committed” the brutal murders of his ex-wife and her friend, Ron Goldman. Simpson has agreed to an “unrestricted” interview with book publisher Judith Regan (who I had the distinct pleasure of meeting last year, and who would probably kill your wife, too, if it helped her close a deal).

The interview will air November 27 and 29. This all comes, of course, at the head of the tidal wave that is O.J.’s forthcoming book, If I Did It (Can you guess the publisher? Can you? Think real hard.), in which The Juice “hypothetically describes how the murders would have been committed.”

O.J. can, of course, go on and on about all this for as long as he damn well pleases, as double jeopardy laws prevent him from ever being convicted of the disgusting crime he clearly wants the world to know he committed. And Judith Regan is happy to collect the money you’ll pay to listen.