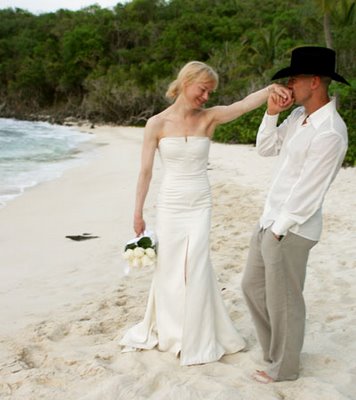 Renee Zellweger has finally opened up about her whirlwind romance/wedding/annulment with/to/from country singer Kenny Chesney. The Oscar winner, who was once engaged to Jim Carrey, wed Chesney in May 2005 after only four months of dating. She filed for annulment four months later, citing “fraud” as the cause of the split.

There was no alternative but to let it go. I made the biggest personal mistake of my life. I felt a fool. I was looking for something else. I just needed to put acting aside. I needed to sit still and not to worry about the dresses and the hair and the travel and the interviews. I was going through huge life changes at the time. I wanted to stop and be a girl for a while. My marriage came during this time and it was desperately important to me. I don’t want anyone to think I didn’t take it seriously.

Sadly, the Bridget Jones star doesn’t go into detail regarding the actual or perceived “fraud” in their marriage, but says simply that “there was no acceptance of my life or my friends.”

Update: After I posted this, a source IM’d to remind me that the “fraud” refers to Chesney’s sexuality — specifically that he’s more interested in Rons than Renees. Chesney vehemently denies these rumors, but my L.A. sources (some of them playing for Team Ron) call bullshit, saying the Angeles gay community has long called him a member. So who am I going to believe? My friends, or the dude who married crazy, crazy headcase Renee Zellweger?