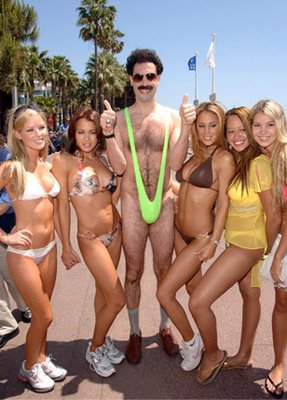 Two John Does are suing 20th Century Fox and One America Productions, claiming members of their fraternity were used in the Borat movie (no, I’m not typing out the whole title), after they were assured the film would not be shown in the United States and that their identities would not be revealed.

According to TMZ (where you can find the court papers), the “movie features a scene in a motor home where Cohen gets drunk with three frat boys who go on a racist rant about how they wished they had slaves and how minorities in the United States ‘have all the power.'” The boys were paid $200 for their appearance. The suit asks for unspecified damages. The guys did sign releases to appear in the movie, but they claim they were signed “after heavy drinking.”

And, with that, I’ve met my Borat-related posting quota for the year. Evil Beet out.