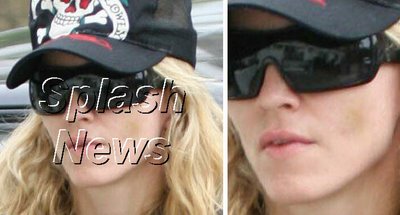 Madonna is sporting a bruise on her left cheek after a scuffle with paparazzi at Heathrow airport this weekend. She was holding her (kind of) adopted baby, David, at the time. According to a source, “When she landed in London, there was a lot of pushing and shoving. She was jostled around. She got hit in the paparazzi’s commotion.” The baby was not injured.

Madonna was returning to London from NYC, where she’s been promoting her latest children’s book, Too Good to be True and her upcoming NBC television special, Madonna: The Confessions Tour Live from London. She’s also been appearing on a variety of talk shows to address the controversy surrounding her adoption.