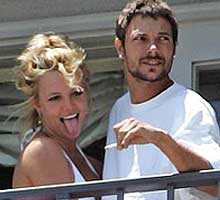 An L.A. judge has dismissed a libel suit brought by Britney Spears which accused Us Weekly of defamation for running a story about a sex tape she allegedly made with K-Fed. The suit was filed last year by Brit and her hubby (who MSN refers to as “dancer Kevin Federline” — ha!), and sought $10M in damages for a story the magazine ran under the headline â€œBrit & Kev: Secret Sex Tape? New parents have a new worry: racy footage from 2004.â€

Judge Lisa Hart Cole concluded the headline was not defamatory, as Brit-Brit â€œput her modern sexuality squarely, and profitably, before the public eye.” She cited examples from Britney and Kevin’s brief and painful venture into reality television, Chaotic, which included shots of Britney filming Kevin in the shower and interviewing him on a bus, while she was naked, and “otherwise catching plaintiff talking uninhibitedly about her sex life.â€ Okay: how lucky are Judge Cole’s law clerks? Can you even imagine the talk in the cafeteria?

Judge Cole’s Clerk: Hey, man, what’d you do today?
Less Fortunate Clerk: Oh, you know, reviewed 150 pages of case law, suggested a dismissal on in rem jurisdiction, ordered lunch for the boss. You?
JCC: The usual. Got in early, had a cup of coffee, billed eight hours watching Britney Spears talk about her sex life in low-cut shirts. Rough day.
LFC: I hate you.
JCC: Yeah. Good potato salad today, though.
LFC: I hate you.