Is Lindsay Trying to Get Sober? 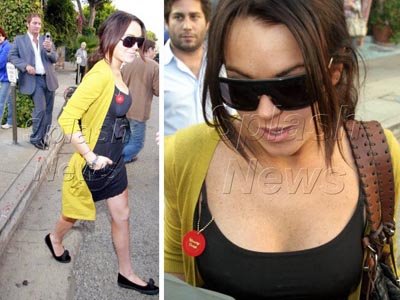 La Lohan set tongues a-wagging when she was photographed leaving The Ivy yesterday wearing a ninety-day sobriety chip given by Alcoholics Anonymous and other twelve-step programs. It seems unlikely that Lohan herself has actually been sober for ninety days, seeing as how we run a story at least once daily regarding just how drunk she was the night before. Lohan’s rep says the chip was a “tribute to a friend.”

Lohan’s ex-boyfriend, Harry Morton, is rumored to be sober, and I’m sure Lindsay had some exposure to twelve-step programs during her relationship with him. Such chips are also sometimes given as “hope chips,” to people with fewer than ninety days sober, to encourage them to reach that goal. At least we now know that Lindsay has heard of AA. You have to start somewhere.