What Happened to Aaron Carter? 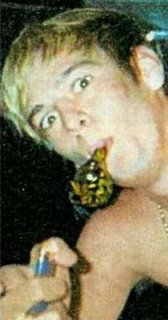 Seriously people, what happened to Aaron Carter? He used to be a cute little tween star who dated Hilary Duff and now, after watching an episode of “House of Carters” I am shocked. He looks strung out and is covered in tattoos. It is sad because he really has had a messed up home life.

I know that poor Aaron has been through a lot. In 2003, his mother and sister spoke out during the Michael Jackson hysteria and admitted that he had spent a night in the superstar’s Neverland Ranch. They publicly wondered if anything had happened between the two. I bet that was a healthy thing for Aaron, you know, to deny he was MOLESTED by Michael Jackson because his mother brought it up in the media. Following this, he also severed ties with his mother when he claimed that she took $100,000 out of his bank account.

This site claims that during the height of his teen fame Aaron spent “$1,500 to $2,000 on drugs every month.” This claim was substantiated by the National Enquirer who came out with the above picture of Aaron reportedly smoking pot when he was 15.

Then he proposes to his 22-year-old former-Playboy-model fiancee Kari Anne Peniche in Vegas and quickly takes it back. I hope Nick Carter is helping his little bro because his E! True Hollywood Story is on its way.