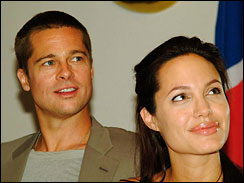 Although it won’t premiere until sometime around the year 2020, the greatest reality show ever continues its casting process, with Brad Pitt and Angelina Jolie planning to adopt another orphan, this time from India. A source says they plan to bring the child to the U.S. by Christmas. While Brad wants to adopt a boy, Angelina may be leaning toward another girl. The source says that “whichever they end up with, they’d like to name the child India to honor its homeland,” and, of course, to graciously set up the “finding nirvana in India” jokes for me to knock out of the ballpark when I’m writing a celeb gossip blog in my forties and India Jolie-Pitt is banging her Greek shipping heir. Pitt and Jolie are currently in India filming the upcoming A Mighty Heart.

Jolie has three children already. The first, Maddox, was adopted in 2002 from Cambodia, a region Angie fell in love with while filming the first Lara Croft film. Zahara, now nearly two years old, was picked up from Ethiopia; and, of course, we’re all familiar with Shiloh Almighty, the omnipotent union of the Jolie-Pitt genetics, who made her much-heralded arrival to our simple planet in May of this year.

Angelina has said in the past, “I want to create a rainbow family. That’s children of different religions and cultures from different countries.” Thanks, Angie. I needed that spelled out for me. The other term I hear a lot lately is “dirty sanchez.” Do you know anything about that?