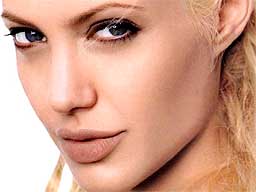 I’m so glad I didn’t run this story the first it happened. Happier still that I didn’t run it the second time it happened. See, folks, it’s not that I find all this business of Angelina Jolie fainting nilly-willy about India to be incredibly, tediously boring, it’s that I was waiting for it to happen a third time. Why take up perfectly good column inches writing about Jolie’s first two utterly irrelevant Indian fainting spells when you just know it will be a way bigger story when it happens the third time?

I am such a good journalist. Good ole’ Angie passed her damn self right out for the third time in India, where she’s been filming A Mighty Heart alongside home-wreckee Brad Pitt, who’s producing the film. Apparently Angelina is just so immersed in the character of Marianne Pearl, who lost her husband, journalist Daniel Pearl, at the hands of terrorists in Pakistan, that she just faints at the thought of a single drop of attention moving away from her and onto the genuinely tragic and terrifying story the film is trying to tell.

Okay, Angie. All eyes on you. Faint away, dear.