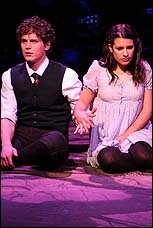 Since I broke my foot and have no social life right now. Here are some links I found poking around the internet. Enjoy!

Evidently the way to celebrate a holiday in India is to get plastic surgery. [Washington Post]

Demi Moore isn’t the only older woman who has bagged herself a boy toy. [Salon.com]

When you mix an amazing play by Frank Wedekind with music by Duncan Sheik you get a kick ass new musical opening soon on Broadway. The “Spring Awakening” site has some awesome videos. If you are in New York in the next few months, go see it. (Pic above is from the show) [Spring Awakening] and [Broadway.com]