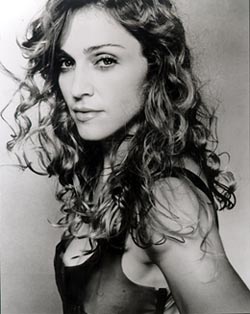 In case you weren’t tipped off by the rock-hard body and Kabbalah-inspired name change to “Esther” and on-stage urging of her fans to put a certain cylindrical part of our President’s anatomy in their mouths and apply pressure (hint: it’s not a finger!), Madonna does not half-ass anything. The singer, who has two biological children, and recently adopted a Malawi infant, is coming back for more.

Loathe to let this adoption-related publicity die down, Madonna is already talking about adopting a three-year-old girl from the same Malawi village where she found her last human-interest story. Says Madge: “I looked at this child with questioning dark eyes and the saddest smile. I thought, ‘She looks just like me.'”

Now, I have not seen a picture of this child, but I am going to go out on a limb and guess that there exists not a single three-year-old Malawian orphan who looks — in any way — like Madonna. Also: “questioning dark eyes and the saddest smile?” What? Is it possible we are edging closer to the ultimate Madonna reinvention, at last unveiling the angsty, brooding, piano-heavy Madonna that the gay community is so, so hoping will tour with Tori Amos? Oh, let it be so!