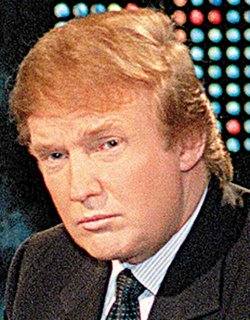 Finally The Donald and I agree on something. Because I’m still mad that Randal beat out Rebecca, and that was like 8 seasons ago. From a recent interview on Larry King Live.

KING: OK, back to some thing current. You recently applauded Brad Pitt’s stance on not marrying Angelina Jolie. I believe you said that you consider everyone — when he said everyone should be married but don’t bug him, why?

TRUMP: Well, look, number one, I know her father. Her father is a nice guy. I think she treats him like a dog but maybe they have some kind of a thing.

TRUMP: I mean this poor sap he comes along and he practically begs her, “I want to see my grandson. I want to see this.” I mean if I were with him, I’d say “Forget it. It’s over.”

TRUMP: I think he’s a great actor and she just treats him terribly. She’s been with so many guys she makes me look like a baby, OK, with the other side. And, I just don’t even find her attractive. That has nothing to do with why I said it though.

He made that statement, right, and he made it like he’s doing this wonderful thing for humanity. I think he probably made it just because he doesn’t want to get married, which is, you know, not so bad.

TRUMP: But I’m not a fan of hers as you probably noticed.

Check out more of the transcript for Trump’s esteemed opinions on K-Fed and Paris Hilton.