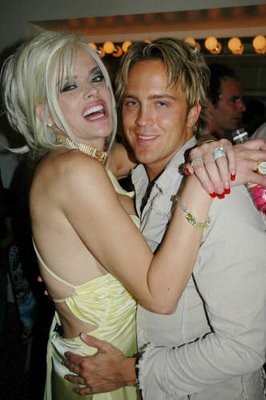 Larry Birkhead has filed suit against Anna Nicole Smith in Los Angeles, hoping to compel the actress/model/trainwreck to return to the United States from the Bahamas so that a paternity test can be performed on her baby, Dannielynn Hope, who Birkhead claims to have fathered. Smith claims her baby daddy is her longtime attorney, Howard K. Stern.
Papers from the lawsuit are sealed, but rumor has it they contain an array of disturbing allegations against Anna Nicole, including that she has been taking methadone, a habit facilitated by Stern. Smith’s 20-year-old son, Daniel, died last month of a drug overdose involving methadone.
Birkhead has alleged for months that Anna Nicole moved to the Bahamas in order to avoid a paternity suit by Birkhead and to avoid being tested for drug use.
I guess we’ll just hang tight until someone leaks the court documents.