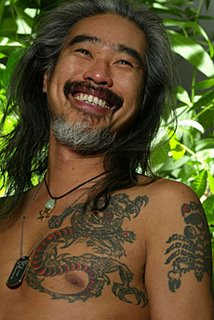 For those of you who cynically expected the inaugural episode of Survivor: Racism to be fraught with racial stereotypes and shameless incendiary racist content, you were totally, completely, disturbingly right.

It started almost from minute one, with the contestants placing themselves firmly in their racial places. My guess is the Black team did not spend that entire day discussing their Blackness, nor did the Hispanic team spend the whole day discussing their Hispanicness, but man oh man, it sure was edited to look that way.

My favorite was Cao Boi (pronounced “Cowboy”), a Vietnamese nail salon owner who monologued about how he in no way fit an Asian stereotype, and later proceeded to perform some manner of voodoo when one of his teammates had a headache. He’s also wearing a Star of David around his neck, which may have some sort of meaning in Vietnamese culture, too, but every time I see it on him I’m like, “Jew?”

When the White team was cold at night, they cuddled and played footsie and pretty much spent the entire evening touching one another as much as possible. Team Hispanic spoke a little bit of Spanish, said “ay ay” here and there, and otherwise generally minded their own business.

The first part of their main challenge involved building a boat and rowing out to sea to light a torch. Wanna know which team took by far the longest to figure out how to build a boat? You guessed it. So the Black team lost the first challenge, and as a consolation prize, they were able to send one player from the opposing team to “Exile Island,” where that player had to remain, isolated, for two days.

In my discussion of their decision-making process, I’d like to go back to the start of the show, at which point the contestants were all on a ship, and were given two minutes to grab what they could from the ship and hop on rafts to go to the island. There were, I believe, two live chickens on the boat at that time. A member of the Black team grabbed one and a member of the White team grabbed the other. However, the member of the Black team looked away for a second, and a guy from the White team took his chicken.

The Black team sent him to Exile Island.

Because he took their chicken.

This is going to be so much fun.