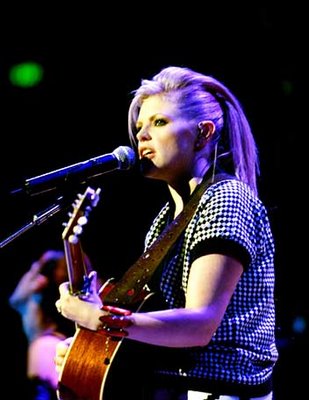 I’m not really sure what Natalie Maines, of the Dixie Chicks, is thinking. It’s been three years since she commented to a London audience that she was “ashamed the President of the United States is from Texas,” sending the country music world into its biggest tailspin since Shania Twain showed her belly button in a music video. Angry “patriots” thought she’d never work again, but the controversial singer has another hit record. The first single from the Chicks’ new album, “Not Ready to Make Nice,” gets a ton of radio play here in Los Angeles, but of course we’re a city that recently lost its last country station.

Barbara Kopple is directing a documentary that follows the Dixie Chicks from the peak of their fame through the anti-Bush firestorm, and it features a scene of Maines watching news coverage of President Bush reacting to Maines’ comments. ”The Dixie Chicks are free to speak their mind,” he said, “[and] they shouldn’t have their feelings hurt just because some people don’t want to buy their records when they speak out. You know, freedom is a two-way street.” In response, Maines says “What a dumb fuck,” and then, to the camera, “You’re a dumb fuck.”

Now I’m not sure how recently this bit was filmed, and I’m not sure how much editing control Maines had over the film, but frankly, I’m kind of tired of this, and I’d think she’d be too. I’m as liberal as the next Angeleno, but it feels like uniformly despising President Bush is so passe. It’s been done. We’re all tired of it, on so many levels. He’s on his way out. Let’s move on.