Another Famous Old Person Has a Lindsay Lohan Opinion 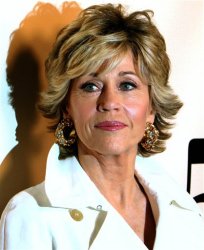 I wish people would leave this sort of work where it belongs, with the bloggers.

Jane Fonda, who is famous, as best I can recall, for workout tapes referenced by Sir Mix-a-Lot and doing something that upset some people during the Vietnam war (I was never much for history), has apparently turned recently to acting, costarring opposite La Lohan in the defining deep-South-blow-job film of our generation, Georgia Rule.

Access Hollywood, dutifully doing their part to stir up the buzz surrounding the film, asked Fonda what it was like working with Lindsay Lohan, and asked for her reaction to a studio exec’s accidentally public blasting of her behavior on the set.
“I think every once in a while, a very, very young person who is burning both ends of the candle needs to have somebody say, `You know, you’re going to pay the piper, you better slow down.’ So I think it was good,” she says. “She parties all the time…and you know, she’s young and she can get away with it. But, you know, it’s hard after a while to party very hard and work very hard. She learned that, I hope.”
Fonda also had some nice things to say. “I just want to take her in my arms and hold her until she becomes grown-up. She’s so young and she’s so alone out there in the world in terms of structure and, you know, people to nurture her. And she’s so talented.”