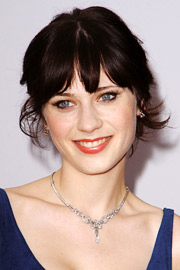 The fabulous Zooey Deschanel has won sought-after role of Janis Joplin, in The Gospel of Janis, which starts filming in November. If you’ve seen Failure to Launch, you understand what a glorious thing this is. If you have not seen Failure to Launch, rent it (and fast-forward through the parts that don’t have Zooey Deschanel in them). Deschanel won the role over a group that included Britney Spears, Lindsay Lohan and ScoJo.

“Punk” singer Pink was the first choice of director Penelope Spheeris for the role. She dropped out of the race, claiming that the producers had turned the casting into “some circus pop contest–who’s the ‘it’ girl who wants to play Janis,” and certainly not because her ego and her drinking problem couldn’t cope with the intensity and competition of what industry insiders refer to as “the casting process.”

Good riddance, Pinky Poo! I was not excited for this movie, but now that Zooey’s been cast, I can’t wait!