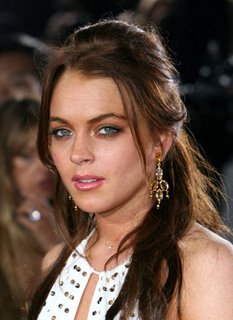 If I had been drinking milk when I first read this headline (I never drink milk; I am lactose intolerant; but still), it would have come straight out my nose.

But wait! It’s not over yet!

“I’ve been trying to go to Iraq with Hillary Clinton for so long,” says Lohan. “Hillary was trying to work it out, but it seemed too dangerous.”

That sound you hear? Is your reality shifting. Give it a minute to settle. Take a deep breath. Clean up the snot-milk.

And we’re not even halfway through our exploration of the cornucopia of stupid that is the interview she gave to Elle magazine. Ready for more?

“I wanted to do what Marilyn Monroe did (during the Korean War), when she went and just set up a stage and did a concert for the troops all by herself. It’s so amazing seeing that one woman just going somewhere, this beautiful sex kitten, who’s basically a pinup, which is what I’ve always aspired to be.”

Let’s put that in black-and-white, Linds. Let’s set aside all those critics who are amazed, time and time again, that despite the cocaine-induced “dehydration” and the anorexia and the starlet-celebutante in-fighting, you put out extraordinary on-camera performances every single time you’re cast in anything, and let’s make sure it is absolutely clear that what you have always wanted to be is not an acclaimed actress, but rather a pinup. Okay. Phew.

BUT SHE’S NOT DONE YET, KIDS!

Is the delicate beauty afraid of going to Iraq?

Of course not. She’ll have a gun.

“I’m not afraid of going. My security guard is going to take me to a gun range when I get back to L.A., and I’m going to start taking shooting lessons.”

There are some more little gems in there, but don’t waste too much of your time reading them, because Lindsay admits that sometimes she will tell reporters “things that aren’t true â€¦ just because it’s fun.” Like when she later told the People reporter that she doesn’t blow coke.