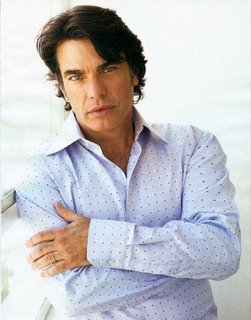 I am a huge tool. I know. And his dining partner probably hates me for that “same-age” call, but whatever, I’m going to enjoy this. Have you all heard my OC stories? You haven’t? Let me tell you.

Once upon a time, in that blissful long-ago age before the world was engulfed (and promptly regurgitated) by Mischa Barton et al, an unknown, recently greenlit show-that-could called “The OC” began filming in Southern California. The beach scenes were filmed in a little place far outside the Orange Curtain called Hermosa Beach. It’s where I play beach volleyball. Anyone who knows me knows I take my volleyball very seriously, so when I arrived at the beach one fine day to find a fake hot-dog stand and camera crews set up next to my court, I was a little disgruntled. When they were causing such a disturbance and fuss that I couldn’t even play my game, I was downright pissed off. Go film in the OC, I thought, or at the very least in Malibu. But no, they were filming in Hermosa. They were all there, Benjamin McKenzie, Adam Brody, both of them quite short and skinny (ha!) and talking incessantly on cell phones in between takes. They walked around like they owned the place, very smug without even being famous yet. “I hate you,” I’d mutter under my breath, “I hope your show flops.”

So FOX aired the show, and of course it didn’t flop. And several months later I pull up to what is supposed to be a fabulous seafood restaurant in Marina del Rey, prepared for a lovely evening lobster dinner with my father and my sister, and there is no parking anywhere. There is no parking anywhere because the whole parking lot is filled with trailers and craft services tables. They must be filming a movie, I think. How annoying. I park really far away and begin the long walk to the restaurant, still excited for my lobster. During my walk I notice that they are, naturally, not filming a movie. They are filming “The OC.” At my restaurant. With lots and lots of annoying bright lights.

Whatever. I am still going to enjoy my dinner. My plans will not be foiled by “The OC” again. I sit down, and wait 30 minutes for the waiter to take my order, because everyone who works in the place is way too busy watching them film to do their jobs. Then I wait 45 more minutes for my overcooked, gross-ass, $40 lobster. I ranted and raved and got it taken off the bill, but the damage was done. I hated “The OC” for life.

Which is why, when I sat down at dinner last weekend at a table next to Peter Gallagher’s, I braced for the worst. But he really was keeping to himself and seemed to be thoroughly enjoying the company of that chick, so his presence did nothing to disturb my meal or my evening, but I still thought it was worth telling Defamer about. And they ran it — woo-hoo!! I have had a very stressful week so you can mock away, but I am going to enjoy this moment.

Kristen Wiig confirms she is MARRIED to Avi Rothman