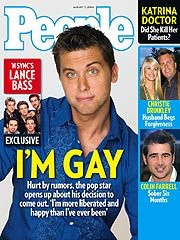 Unless you have been holed up in your room with nothing but your gin and your Def Leppard albums for the past 15 hours or so, it should come as no suprise to you that Lance Bass is gay. If you had ever even heard of Lance Bass before today, it should come as even less of a surprise. He is gay, gay, gay, in much the same way he’s been gay since the very early days of *NSync, by which I mean obviously. If you still don’t believe me, TMZ has the video. He’s also very much in love with Amazing Race phenom Reichen Lehmkuhl, who is clearly very important right now because the mainstream media is taking the time to spell his name right.

Starting from nearly the minute I woke up, I have received an unending barrage of IMs, emails and phone calls from people relaying this information to me. People who haven’t called me in months called me today because Lance Bass is gay. So thank you for that, Lance Bass. Even stripped of your tenuous (and therefore unthreatening and marketable) heterosexuality, you are still giving young women in this country something to bond over. You’re that good.

The real news here, of course, is not actually that Lance Bass is gay, because Gawker’s been reporting that since sometime in the late 80s. The news here is that Lance Bass had the balls to look a mainstream media member in the face and say it. And that is awesome, and I like the guy so much more now than I ever did when he was boy-banding or faux-Cosmonauting or doing whatever it is that washed-up boy-banders do before they come out to People magazine. I’m impressed with his fearlessness and his sense of self, and also with the example he has set for Hollywood, for closeted aspiring boy-banders everywhere, and for poor Tom Cruise.

In editorial fairness, I should note that the timing of this “revelation” coincides with him pitching a gay-centric sitcom (with Joey Fatone — whose last name, with some cryptographic magic, can be rearranged to read “Fat One,” which is funny because he was the fat one), but I’m so damn impressed with the dude I am not even going to harp on that. Just don’t get me started on Kat McPhee’s “bulimia.”

So there you have it, America: Lance Bass is gayer than the day is long. Now pour some more gin and blast Euphoria again.