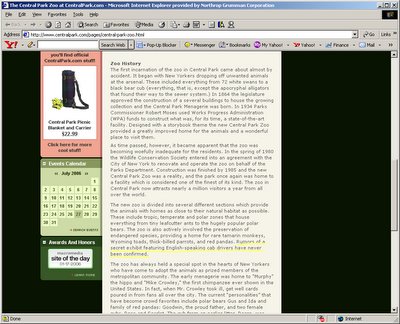 From the Central Park Zoo official website. I took a screenshot so I can be less devastated when they fix it. Since the print is so tiny on the graphic:

“The new zoo is divided into several different sections which provide the
animals with homes as close to their natural habitat as possible. These
include tropic, temperate and polar zones that house everything from tiny leafcutter ants to the hugely popular polar bears. The zoo is also actively involved the preservation of endangered species, providing a home for rare tamarin monkeys, Wyoming toads, thick-billed parrots, and red pandas. Rumors of a secret exhibit featuring English-speaking cab drivers have never been confirmed.”

Someone is soooo getting fired over at Central Park. And someone (hopefully the same someone) is totally getting the blow job he was promised.