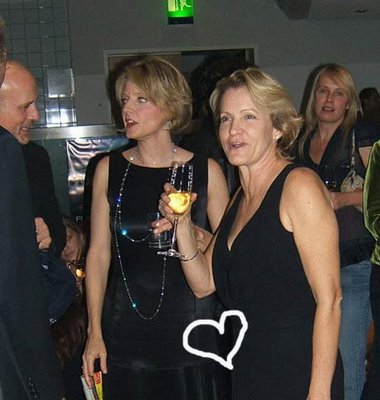 Perez Hilton continues to wage his own personal war against gay celebs who choose to remain — at least publicly — in the closet. Up today: Jodie Foster and her girlfriend, Cydney Bernard, whom Perez claims Foster has been dating for thirteen years. A quick Google search reveals that Bernard is a producer, and the two met on the set of Sommersby. Foster has two kids, and she’s never revealed who their father is.

Foster’s relationship with Bernard is well-known in Hollywood circles (in fact, it’s mentioned on both their IMDB pages), but Foster has clearly been perfectly happy keeping their relationship (and the rest of her personal life) out of the public eye. I mean, she’s Jodie Foster. She doesn’t exactly need paparazzi coverage to have a successful career.

Celebrity gossip bloggers have touched on the topic in the past, but, let’s be honest, Perez is the celebrity gossip blogger, and his readership has grown by more than 200% in the last six months. He now reaches nearly 3 million readers a day, which is approximately the number of viewers who tuned into Laguna Beach last season. I don’t expect Foster to hide from this; my guess is she’ll give a statement to People magazine next week.

Some critics claim Perez has mounted something more akin to an Inquisition than a gay pride parade with his regular outing of celebs. Is it fair of him to pull shit like this? No, no it’s not. Does it have the potential to send an extraordinarily positive message to the gay community, closeted or otherwise? Yeah. I think it does. To wax philosophic for a moment, it’s interesting that this kid from Miami who set out to talk shit about famous people in his spare time may actually have a significant cultural and historic impact for the gay community. Interesting, frightening, and pretty damn cool.