Blind Item! Does Eddie Winslow Have the HIV? 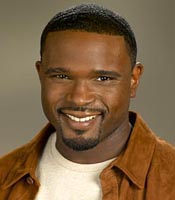 The Panache Report ran the following blind item awhile back:

A young lady got in touch with me last week and related this disturbing story to me and she also emailed me numerous photos of her and “the subject” of this blind item.

A few years ago, she cared for her brother before he died of AIDS. About eight months ago, she started dating an actor who appeared on a popular black sitcom that has since been cancelled. Her family was impressed with him because he was a celebrity. One day, at work, she had a bad headache.

That evening, she went out to dinner with the actor. After dinner, they rented a movie and returned to his house. After the movie, before they became intimate, she insisted on protection, he balked, she grabbed her coat, he relented, she stayed, and they proceeded to have sex. Afterwards, she went into his bathroom, her head was still throbbing and she opened his medicine cabinet, looking for aspirin, instead she found AIDS medications (the same her brother took before his death).

She angrily confronted the actor, he tried to deny it until she threw the vials in his face. He finally confessed, saying, he probably got infected at one of the downlow parties he attends, he also told her-that he has had the virus for three years and he admitted to having unprotected sex with women and men on a constant basis. She was enraged, not only did he have the virus, he just admitted to spreading it intentionally and he confessed to bi-sexuality.

She screamed, ‘no wonder you didn’t want to wear a condom,’ he said, ‘Hey, someone gave it to me.’ She slapped him and stormed out the door! She got tested and was negative. She wanted to put this incident behind her but she found out, the actor was dating a black female actress. Through mutual friends, she was able to get word to the actress before the actress became intimate with him. Despite calling the “Health Department” on him, it is rumored the actor is dating an up and coming black female in the entertainment industry on the East Coast.

The young lady who related this story says “A headache may have saved my life-because over time, I may have become comfortable & trusting and let my guard down by having unprotected sex with him. “This same headache may have also saved the actress’s life.”

Hints..Although there have been numerous black sitcoms on the air, we can do a process of elimination on a few of the shows. The shows the actor did “NOT” appear on: Good Times, The Jeffersons, What’s Happening, The Cosby Show. And the show was carried on a “major” network. Also, we hinted in a prior blind item about this actor regarding downlow activities, Paris visited message boards that copied and pasted that particular blind item and most of the participants guessed his identity.

Now MediaTakeOut is claiming they’ve solved the mystery. Apparently they’ve received nearly 500 emails claiming that the man in question here is Darius McCrary, who played Eddie Winslow on Family Matters. Is it true? Who the hell knows. But the lesson here is obvious: always use a condom, even when you’re sleeping with a washed-up former TGIF mainstay. Whoever’s banging that methed-up Jodie Sweetin these days, you’ve been warned.