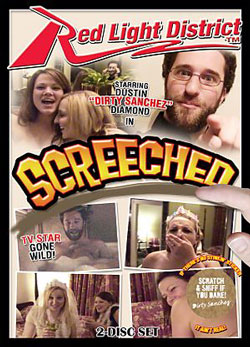 Evil T and I are not especially skilled in the fine art of film review, and Spiteful Lars prefers his pornography to involve Kevin Federline, so we left it up to those lovable pervs over at Fleshbot to review Dustin Diamond’s feces-riffic opus, and here’s what they had to say:

That Diamond, whose financial woes drove him first to radio stations selling anti-foreclosure t-shirts, now peddles a sex tape through “1 Night in Paris” purveyors Red Light District, comes across as painfully self-conscious should be a given, but that the video fails to reveal a hidden redeeming talent is the unkindest cut of all.

Diamond made the tape after a Wisconsin club appearance when he was invited to join a bachelorette party in their hotel room, so he tells the camera, and the video is part of a series of competing sex tapes released by his friends. He addresses the camera as both “Mark” and “Bro”.

Diamond’s entreaties to the two-girl bachelorette party (including “You grew up with me, baby!”) eventually result in a gradual breakdown of their inhibitions, and it is impressive to hear him talking them down…

Shot in very poor P.O.V. style, “Screeched” features too many shots of Diamond’s face (Ed: frankly I’d prefer that to shots of his head, if ya know what I mean). It is a plus, though, that the banter seems real and that the bachelorette party, getting consistently drunker, appears nevertheless to be doing this of their own volition.

And that hyped Dirty Sanchez comes as something of an anticlimax. There is a lip. There is poo.

In my previous research on the topic of the Screech sex tape, I’d not come across the fact that he was intruding on a bachelorette party — apparently the key female players here are the bride and her bridesmaid. Can you imagine destroying your marriage before it’s even begun because you had dirty, on-camera, poo-related sex with Dustin Diamond? Whoever this would-be groom is, he narrowly dodged a bullet.