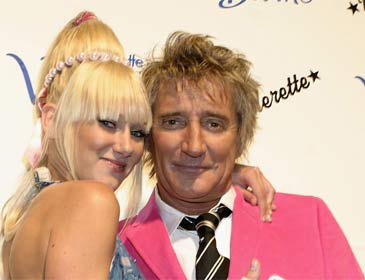 Rod Stewart offspring and Paris Hilton sidekick Kimberley Stewart, 27, has liver disease from excessive alcohol consumption, her father told Rolling Stone. Before I get into the details, I’d like to note what a great dad Rod Stewart must be. This is really what fathers are for: alerting the national media when your liver malfunctions because you’re a raging alcoholic. It’s like that one time my dad called his buddy at Reuters when I got my first period. I love you, Pops. Seriously, was Rod Stewart drunk when he gave this interview?

Says the elder Stewart: “She just discovered that she had a very serious liver illness from drinking too much. She said to me, ‘Dad, I’m half Scottish – I thought I was allowed to drink a lot.’ “I said, ‘No, darling, it doesn’t work like that.'” Ah, that glorious moment in all father-daughter relationships, when the daughter assumes that her genetic predisposition to alocholism somehow also shields her from its consequences, and the father, wise from many years of drunkenly saying mind-blowingly stupid things in interviews, assures her that this is not the case. Apparently Stewart has quit drinking and smoking three months ago and has started seeing a liver specialist.

If you can believe it, Kim’s brother, Sean, has put some time in at a rehab center for drug and alcohol problems.

On a side note, could this be the “friend” for whom Lindsay Lohan was wearing an AA 90-day chip earlier in the month? Are Lohan and Stewart even friends? I’m not certain, but I do love to speculate on these matters.

Superman's cape one of several top collectibles sold at auction