Michelle Rodriguez In Love with a Girl 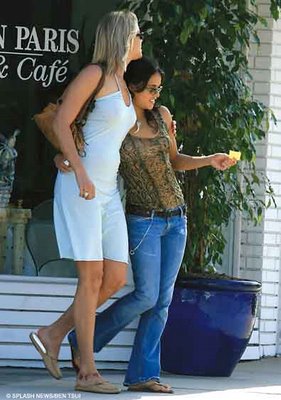 Via The Advocate‘s interview with Kristanna Loken, star of Terminator 3 (although if Rodriguez tells her side of the story, it will undoubtedly be through People, our nation’s A- and B-list one-stop-shop for publicly coming out):

At first Loken, 27â€”who has a recurring role as lover of Shane (Katherine Moennig) on Showtimeâ€™s The L Word this seasonâ€”affirmed that sheâ€™s in a relationship but wouldnâ€™t specify the name or gender.

Then we mentioned the tantalizing stories Loken has told in past interviews about getting tight with Rodriguez when they filmed BloodRayne in Romania. Hereâ€™s what happened next.

What about all the stuff that was said about you and Michelle on the shoot?
[Laughs, then takes a deep breath] There is the $64,000 question. Umâ€¦I donâ€™t even know how to answer that.

It seems like you both had a lot of fun partying.
Uh-huh. [Smiles, doesnâ€™t say anything]

Ooh, OK. You donâ€™t want me to print that?
You can print it. [Laughs again] The very hot housekeeper. No, just joking.

Honestly, just reading this, it doesn’t necessarily seem like she and Michelle are lovers. I mean, it’s possible the two of them got wasted and murdered several of the extras on the BloodRayne set and are storing the bodies in Kristanna’s attic, which is guarded 24/7 by Kristanna’s (very hot) housekeeper. But I guess you had to be there. The Advocate folks seem pretty confident on this one.