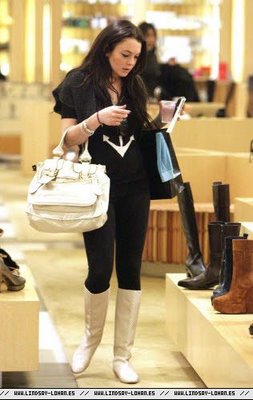 It is so weird that Hollywood has become a warped version of High School. This whole Paris/Lindsay/Stavros/Nicole/Harry/Brandon situation is getting nuts. It seems every night one of them hooks up with someone or says something vicious behind his or her backs. Last night was not an exception. Lindsay was out, again, you know, because she is “not a party girl.” I really want to forward that girl a list of my favorite TV shows and movies. I think it would start to just be exhausting to whore it up 7 days a week. Last night, Lindsay was out at the Genetic Denim One-Year Anniversary Party but Wed, she was off throwing verbal assaults at Paris Hilton.
Wanna see her calling Paris a cunt? Here ya go!
I guess what prompted this was that Paris was making out with Stavros and Paris was chatting with Harry. Wait, no, Lindsay was making out with Stavros and Paris was chatting with Harry. I guess Lindsay was tired from all her partying because she took a pit stop to pick up a $4,000 bag.
Ah Young Hollywood.