It’s AmIdol Day: Ayla Brown Has an Album Out! 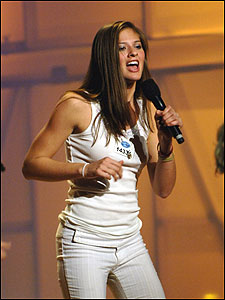 AmIdol thirteenth placer Ayla Brown (remember her? college basketball? dad was a Senator? rough life? yeah.) apparently released an album, Forward (oh lord please tell me that’s the position she played on her basketball team), on October 17 after signing with Double Deal Records in late August (yeah, we haven’t heard of ’em either). I know this only because a song from it, “Thanks to You,” just came on my Pandora box. It’s a slow, ballad type of song. It’s not awful.

I love this quote from today, posted on her website: