Another Day, Another Lie By a Spokesperson 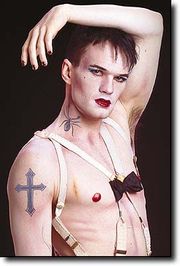 One evening, a few years ago, I got really excited because I was going to see my favorite, Neil Patrick Harris (aka Dougie Howser, MD) in “Assassins” on Broadway. After the show, because a friend of a friend was in the cast, we waited at the stage door and I got to meet Neil Patrick Harris. Oh dreamy Neil Patrick Harris. Soon after, a friend of mine, who is an established musical theatre actor, was hearing my story and stated, “You know he’s totally gay right?” In the musical theatre community, of which Doogie Howser is a big part, it is well-known that he is gay. I heard the same thing about T.R. Knight before he was forced to come out. Obviously, he won’t come out of the closet, partially because he plays such a woman-hungry character on “How I Met Your Mother.” New York and Hollywood are very different beasts. I have heard, from very credible sources, that he has been sighted trolling various gay bars in New York. Also, a friend of mine said that they saw him and his long time boyfriend, David Burtka, in Williamstown, Mass. and they looked “very” together.

An article recently came out that essentially “outed” Neil stating,

“Nepotism is alive and well in Hollywood. Former Doogie Howser star Neil Patrick Harris, 33, recently got his longtime sweetheart David Burtka, 31, a guest role on his series How I Met Your Mother (airing Wednesday nights on CH). Burtka is an experienced theatre actor (he played opposite Bernadette Peters in Gypsy on Broadway and starred in the touring company of Beauty and the Beast) but also had small parts on episodes of The West Wing and Crossing Jordan.â€

Via [Towleroad] his publicist reacted to this article by denying this homosexuality stating, “He’s not of that persuasion.”

Uh huh, cause publicists ALWAYS tell the truth. Why do I always fall for gay men?

Disclaimer: This picture above is from his turn in “Cabaret” at Studio 54 in New York. I just wanted one where he looked super gay to prove my point.