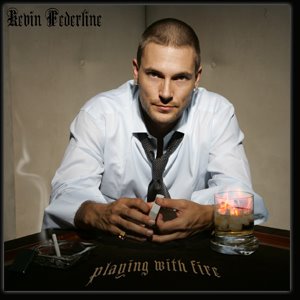 I hear it’s some other manner of holiday today, too, but, seriously, who cares if it’s freakin’ Christmas? The Kevin Federline album drops today! You can listen to Playing with Fire (the censored version) for free on AOL music now. You only have to stick around for two minutes to hear the very first usage of “California kush.” God, weed is so cool.

I’ll be honest: it’s not a terrible rap album. It’s not, guys. Sorry to disappoint. It’s pretty unremarkable aside from the fact that it’s Kevin Federline’s, but it’s not that bad. The album is largely centered on his bizarre rise to fame, and there are some great lines. On “America’s Most Hated,” he wonders, “Who told this bastard that he can’t rap / I’ve got fifty mil / I can do whatever I want.” And you know what? He’s right. (I’ll note that I’ve seen the last part of this line taken out of context in a variety of reviews, paired with a line that comes earlier, “All these model chicks wanna do me,” implying that he’s unfaithful to Britney. That’s not what he said, guys, and if you’re looking that hard for a reason to criticize, Federline won.)

Throughout the album, KFed is consistently straight-forward about who he is and why he’s famous, and I give him credit for that. It’s typically peppered with the obligatory references to driving fancy cars and drinking expensive liquor and smoking killer weed, but there are also plenty of references to Britney (who he always refers to only as “my wife”), and they’re all really sweet. He mentions more than once how much he’s in love with her, and I started to understand — just for a minute — how Brit fell for him.

Look, it’s not a stellar album, and if he weren’t married to Britney Spears, you’d never hear anything about it (primarily because it never would have been made). But the thing is, he knows that, and he’s honest about it on his album. He gets points from me for that. It’s totally mediocre, but it’s not so awful as we’d imagined. I mean, have you ever actually listened to the lyrics in anything Gwen Stefani wrote? Playing with Fire is Pulitzer Prize material in comparison. Also, there’s a hidden track. When was the last time an album had a hidden track? Dookie?

The hype surrounding the album hasn’t seemed to help ticket sales for Federline’s shows, as Page Six reports that his Cleveland show was canceled due to lack of interest, and his NYC show is likely to meet the same fate. But today — and just today — you’re okay in my book, Kevin.