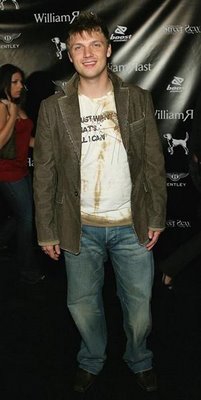 I can’t hate you anymore. I can no longer despise your desperate and embarrassing pleas for attention and publicity. It takes too much energy. So I’ve decided to embrace you, and all the glorious Paris Hilton shit-talking that comes along with you.

The latest stop on Nick’s “Fuck Paris Hilton/Watch My TV Show” tour is Britain’s News of the World, where Carter states that Paris “was a drunken prude who as far as I can see did not really like sex. She relied on drugs and drinks to give her confidence in the bedroom and was more often than not too wasted to even perform. I lost count of the nights I had to pick her off the floor and drag her to bed passed out.”

He accuses Hilton of smuggling drugs overseas, stating that “if she was going overseas, she’d cut a hole in her teddy and stuff it with cannabis. She had to have her own private stash with her at all times regardless of the consequences.”

Continues Carter: “The only thing that made her happy was her own reflection. She spends so much time looking at herself in the mirror telling herself how gorgeous she is.”

Keep it up, Nick. We’re digging it now.