Somebody is a Copycat 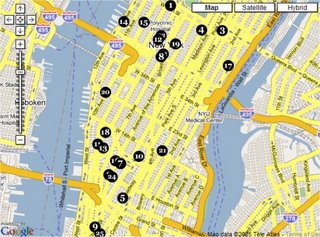 Going through Page Six this morning I realized that they have a feature called the “Celebrity Star Map”. Now click on this link and you can run your mouse over a map of Manhattan and see where various celebrities have been spotted doing various noteworthy things. If you are a local New Yorker, you too can have your star sighting posted on the internet. Their site is a bit sad, with only three sightings which include Jacob the Jeweler, Dr. Ruth, and Julia Roberts.

This sounds quite similar to something that Gawker instituted a few months ago except that Gawker’s is quite cool, and quite popular. They have twenty-five sightings including Anne Hathaway (talking about how fat her fellow actresses were…um, honey you aren’t exactly Nicole Richie), Parker Posey (evidently being a bitch but I love her anyway) and Anderson Cooper (who could also be my boyfriend if he wasn’t playing for the other team).

So really Page Six, I know you are trying to jump on the bandwagon but Gawker is kicking your booty.