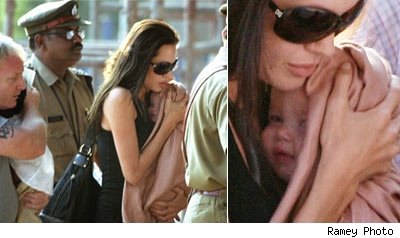 Angelina Jolie just hates it when photogs catch pictures of Shiloh without forking over the requisite $4M. [Just Jared]

Nicole Kidman’s husband, country singer Keith Urban, is the latest celeb to enter rehab for an alcoholism relapse. It’s going to be okay, Nicole. Remember, there’s still no twelve-step program for Scientology. [Allie is Wired]
The Hills‘ L.C. is officially dating Brody Jenner, the ex-boyfriend of her Laguna Beach nemesis, Kristin Cavallari. No comment yet from Cavallari, but we’re keeping a close eye on her t-shirts. [Hollyscoop]

Break out the weed and the slap bracelets. Fraggle Rock is coming to the big screen. [popbytes]

Breaking! Kevin Federline may not be the model father you’d previously believed him to be. Well, at least you were right about the model part. [PopCultureWhore]

I’ve said it before and I’ll say it again: Christie Brinkley is such a rock star. [Teddy and Moo]