Can’t Buy Me Love: The Mills/McCartney Divorce Gets Uglier 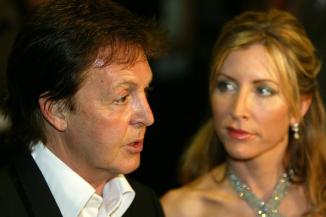 The Heather Mills/Paul McCartney divorce proceedings have stumbled across a landmine of their very own. TMZ has obtained transcripts of the allegations Mills makes in court documents, which are not exactly a big step forward for social perception of amputees (no pun intended — well, maybe). Mills paints herself as a battered prisoner of war, as helpless and she is legless, begging the abusive warden of Paul McCartney for table scraps, as the ruthless Beatle forced her to cook two dinners a night, single-handedly, to crawl up airplane steps when they weren’t wheelchair accessible, and refused to allow her to use a bedpan at night when it was difficult for her to walk to the bathroom.

She accuses McCartney of abusing drugs and alcohol, of choking her and cutting her, of refusing to let her breast feed, and of denying her the use of his “beautiful spare office in New York.” There’s also quite a bit of them pushing one another into bathtubs. The allegations of physical and emotion abuse date back to 2002, at which point Mills was clearly of the opinion that McCartney could, in fact, buy her love. Or at least lease it until they’d been married long enough for her to get a decent settlement. The couple have one child together, Beatrice, who I’m sure will get a real kick out of reading this stuff when she’s old enough.