An Imagined Conversation Between Paris Hilton and Nicole Richie 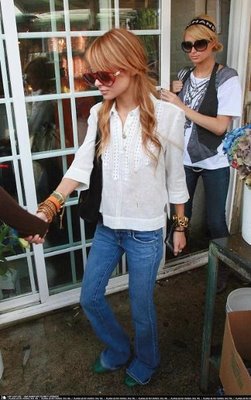 I did not write this. I grabbed it from Go Fug Yourself, because it is easily the funniest thing I’ve read in like a year. I want to share it with the world.
PARIS: Dude, I’m so happy we’re friends again.
NICOLE: Me too.
PARIS: You make me look so tall and healthy.
NICOLE: You make me feel so small and delicate. And smart. I enjoy that.
PARIS: I’m just glad we’re over that thing that happened.
NICOLE: Me too. Our friendship is more important.
PARIS: I know. I mean, bros before hos, right? I seriously never would have hooked up with him if I knew you really liked him.
NICOLE: What?
PARIS: Stabby. If I’d known you were THAT into him, I never would have stolen him from you.
NICOLE: Huh?
PARIS: STABBY. STABBY NACHOS.
NICOLE: Who is Stabby Nachos?
PARIS: You know, tall? Greek? Your boyfriend?
NICOLE: Stavros Niarchos?
PARIS: That is what I SAID. STABBY NACHOS.
NICOLE: He’s not my boyfriend.
PARIS: He was until I stole him from you.
NICOLE: What?
PARIS: Or was that your sister?
NICOLE: I don’t HAVE a sister. YOU have a sister.
PARIS: We both have sisters, dumbass. We’re both the skinny sister! Woo! Remember?
NICOLE: Paris. I don’t have a sister.
PARIS: Um, did they give you electroshock therapy when you were in that eating disorder thingie? You totally have a sister. You guys were on that TV show forever, like when you were little kids? Remember? You guys are twins, or something.
NICOLE: Paris, that’s Mary-Kate Olsen.
PARIS: YOU’RE Mary-Kate Olsen.
NICOLE: NO, I’M NOT.
PARIS:…are you sure?
NICOLE: YEAH.
PARIS: Really? Because I think you’re wrong. You look just like her. Do you have your driver’s license with you? Because I don’t think I believe you.
NICOLE: I’M NOT MARY-KATE OLSEN.
PARIS: Then who the hell are you?
NICOLE: It’s NICOLE.
PARIS: Richie?
NICOLE: YEAH.
PARIS: Oh.
NICOLE: YEAH.
PARIS: Um. So, this is awkward.
NICOLE: YEAH.
PARIS: I guess the friends thing is off again, then.
NICOLE: You know what you did.