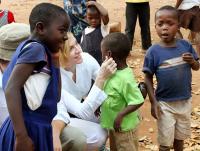 Although her publicist is still keeping busy making denials (I assume in an attempt to increase publicity surrounding the event), as E! Online says, “we’ll just have to settle for the word of the child’s father and a Malawi village chief and the director of the orphanage and an African judge and a pastor and the secretary for the Ministry for Gender and Child Welfare.”

The deputy registrar at a local courthouse tells Reuters that “Madonna and the husband filed their papers for an interim order this morning at Lilongwe High Court, and the judge gave the ruling at 2 p.m. this afternoon.”

The lucky little man is one-year-old David Banda, whose father placed him in an orphanage after his mother died days after his birth due to complications. “I am very happy,” says the father. “As you can see, there is poverty in my village. I know he will be very happy in America.” Although Madonna and her husband, Guy Ritchie, currently live in Britain (Duh, isn’t it obvious from her accent? Madonna was clearly not born and raised in Detroit), I suppose it’s still a small step up from a Malawi orphanage. Congratulations to The Ritchies, and to the luckiest adoptee since Baby Suri!