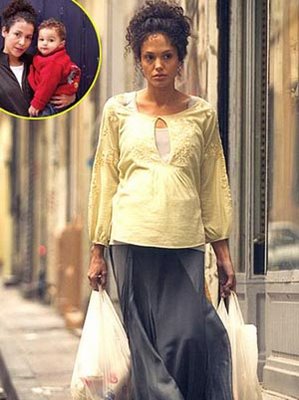 The casting (and cosmetic skin-darkening) of Angelina Jolie as the mixed-race Marianne Pearl in the upcoming A Mighty Heart, about the life and death of journalist Daniel Pearl, is reportedly drawing some criticism.

“I had assumed that the days when white actors took on the roles of black people had long passed away… There are mixed-race or black actresses who could have done a damn good job in this role,” says the blogger at BlackLooks.org, continuing that “what is taking place here is an act of arrogance and whitewashing by people who think that because they are super-rich they can be anything they want.”

What does the actual Marianne Pearl think of all this? “Iâ€™m delighted Angelina Jolie will be playing my role. I deeply admire her work.”

Honestly, what’s retarded to me about all this is that the BlackLooks.org blogger wrote this stuff in mid-July. Personally, I agree with very little of what she says, but why is it surfacing in mid-October? Is it because now we have photos from the set of Angie with dark skin (which appears to be perfectly tastefully done)? Are we vamping up the publicity process for the movie via a single blogger whose opinion, voiced briefly nearly three months ago, is being twisted to represent that of the entire African American community? Did no one else actually visit BlackLooks.org to read the blogger’s comments in context?

Khloé Kardashian to have sole custody of new son