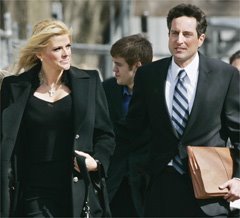 Star magazine reports that Anna Nicole Smith married her lawyer and constant companion, Howard K. Stern, in the Bahamas on Thursday morning. The ceremony took place on a yacht off the coast of Nassau, and Anna Nicole wore a pink bikini for the event.

Update: According to Perez, this quickie marriage may be an attempt to prevent a paternity suit by Larry Birkhead, a former fling of Anna’s who is claiming to be the father of the baby. Perez’s source says:

“I am positive that the reason they got married is because under the family law in the Bahamas, if a person marries the mother AFTER birth of the child AND acknowledges he is the natural father (which Howard Stern did on the Larry King show) — he is presumed under their laws to be the father of the child.”

In effect, this prevents Birkhead from filing a paternity suit and from insisting on a DNA test. Smith recently became a legal resident of the Bahamas.

This just keeps getting stranger.