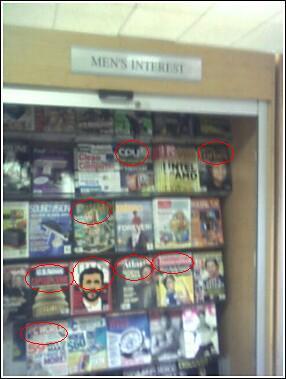 This has nothing to do with celebrities, celebutantes or gossip, so if you can’t handle some off-topic ranting, please avert your eyes.

Anyone who knows me knows I’m pretty far from a “femi-nazi” label. I mean, I write a gossip blog, for chrissake. I’m not one to hold picket signs or get petitions signed or, god forbid, write my senator. It’s wonderful that there are people out there so invested in women’s empowerment, and I respect and appreciate their efforts, but I am simply not among their ranks.

But I was pissed off today.

I’m at LAX, outside the Southwest baggage claim, when I walk past a set of magazine racks. On the top of one of the racks, I see a big sign that says “WOMEN’S INTEREST,” and beneath it they have all the typical gossip/fashion rags, like Us Weekly, People, InTouch, Cosmo etc. I think to myself, just absently, that it’s kind of bullshit they should so blatantly assume that only women read those magazines. Gay men, anyone? Or straight men who want to know just exactly what a woman can tell about him by the way he’s decorated his apartment? Sheesh.

Next to it is a rack with a sign that says “MEN’S INTEREST.” And I was so pissed off about this that I took a picture with my camera phone. I never do that. But I’ve posted it here, and I’ve circled some of the “men’s interest” magazines available at LAX, the first stop for many on a visit to our great nation. They include:

Golly gee. I didn’t realize that MBA I’ve been pursuing made me so damn butch. Maybe I should drop out and give beauty school another chance. Thank you to one of the largest international airports in both the country and the world for making that so abundantly clear to me.