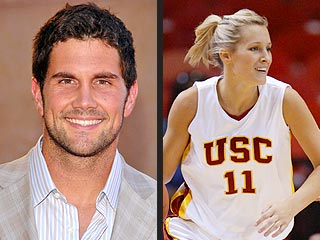 People reports that Arizona Cardinals quarterback and all-around hottie Matt Leinart has knocked up some chick he banged. Her name is Brynn Cameron. She’s a 20-year-old junior at USC and the most attractive female college basketball player in the history of the world. According to People, she will “sit out the upcoming basketball season,” which gives me the much-needed confidence that this girl has the sort of informed decision-making skills crucial to motherhood.

As many of you may know, Leinart has been linked romantically to songstress Paris Hilton. So I suppose the good news here is that Leinart saved his irresponsible sperm donation for some chick we don’t care about, and we will not have to deal with the media frenzy that would surely surround a Paris Hilton pregnancy, culminating in the national discussion on whether or not it is appropriate for her to take a child to Hyde in an oversized Fendi bag.

(I hope you people didn’t think I was being serious about the “songstress” part.)

I wish them the best; I’m sure the whole Leinart family will find as much joy in the Arizona Cardinal’s Pink Taco Stadium as Matt once found in Paris’s.