The eight of you who followed the plot of Pirates of the Caribbean: Dead Man’s Chest will be relieved to know the filming of the third edition is in full swing out here in Los Angeles. I’d typically make some reference now to the cliffhanger at the end of the last one, and how it will be duly resolved, but after the investment of three hours of my life that I will never get back, I have absolutely no idea what happened in that movie. There was a sword fight on some manner of wheel and a Johnny Depp character better suited to The Birdcage, but everything else went right past me. But since most of the known world saw it anyway, I can’t really blame Disney for trudging forward with another.

They’re filming the Black Pearl scenes right now off the coast of Palos Verdes (across from Joe’s Crab Shack for those of you who want to go a-stalkin’). A few of my more nautical cohorts went sailing out there this afternoon and sent me some photos of the crew setting up. They didn’t stick around for the actors to show, but they did get a shot of Depp’s yacht, which is where I imagine he meets up with Tim Burton for a little pitching and catching. If anyone’s got pics of filming with the actors, send ’em to evilbeet@gmail.com, and I’ll give credit where credit is due. 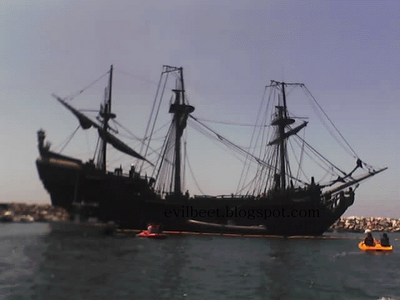 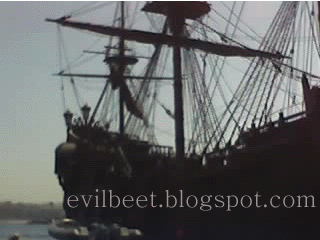