Britney: "You Assholes Thought I Got Knocked Up Again On Purpose?" 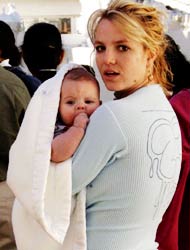 I’d like to begin by issuing an apology to Brad Pitt and Angelina Jolie. In a post last month, I was unnecessarily harsh to the couple, ranting and raving about how insane, fame-whorish, and bad-parenty it was for them to allow a wax likeness of their two-month-old child to be photographed for money.

Compared to Britney Spears, Pitt & Jolie are the Cleavers. (Is there actually anyone alive today who ever watched Leave it to Beaver? Why do we still say things like that? I have no idea who the Cleavers are and you don’t either.)

Ms. Spears said an assortment of very retarded and childhood-ruining things while in the presence of People magazine’s writing staff, and I’d like to summarize the highlights. While Brad and Angelina waited until their baby had a good solid two months of footing in this world before demonstrating publicly that she’s nothing more than a long-term PR stunt, Britney formally announces she didn’t really want her baby while it’s still in utero. “It just kind of happened,” said Britney, by which she means “I meant to to take my birth control, ya’ll, but I was too damn stoned, you know? Oh-muh-gahd. Fee?”

It’s also nice to see that Britney’s in touch with the real reason she wanted to get knocked up in the first place: “It makes me feel needed and wanted,” she says, “so I like it.”

It’s so clear now: when international superstardom, worldwide adoration, mountains of cold hard cash and a steady diet of bong hits and McDonalds just won’t heal that empty ache within, you know you’re ready to be a mom.