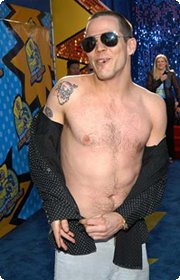 …and TMZ has it on tape. Actually, the Jackass star invited the paparazzi up to his apartment, where he was getting stinking drunk with his grossly anorexic and probably-not-gonna-make-it-as-an-actress-if-her-utter-inability-to-be-natural-on-camera-is-any-indication girlfriend. He then tells the camera man that he and Nicole Richie’s relationship was entirely a PR stunt, blasts Brandon Davis for being an overall fuckwit (props for that), calls Paris Hilton a “self-made millionaire,” and makes the (actually pretty dead-on) point that Lindsay Lohan and Eminem have similarly inspiring rags-to-riches stories. He mentions repeatedly that all he’s ever wanted in life is to be hounded by the paparazzi. Somewhere in there he appeals to Nicole to call him, as he’s lost her number and email address and would like to be friends again. His disturbingly anorexic girlfriend gropes him the whole time. “Whatever comes out of my mouth,” he tells the photogs, “run it.”

It’s like watching a trainwreck. A beautiful, glorious, drunken trainwreck.