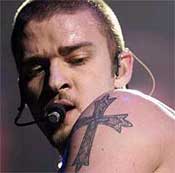 Excuse the brief leave of absence, folks; in the wake of the Kate Hudson/Strange Bearded Man separation, I needed a mental health day. It happens. I’m much better now, thanks for asking.

So let’s catch up, shall we?

For no discernable reason whatsoever, Justin Timberlake went on record with Vanity Fair to announce his unbridled ire for the vocal stylings of American Idol’s Taylor Hicks. From MSN:

â€œPeople think he looks so normal, and heâ€™s so sweet and heâ€™s so earnest, but he canâ€™t carry a tune in a bucket,â€ Timberlake told Fashion Rocks, a supplement of Vanity Fair. Timberlake also thinks that Hicksâ€™ fame is fragile. â€œIf [Hicks] has any skeletons whatsoever, if God forbid, heâ€™s gay, and if all these people in Mississippi who voted for him are like [then he takes on a thick southern accent], â€˜Oh my god, I voted for a queer!â€™ Itâ€™s just too much pressure.â€

We get it, Justin. You smoke weed, you sport a tat, you’re banging Jordan Catalano’s ex, and you’ve risen to that pined-for pinnacle of your career at which your album titles can eschew the space bar entirely. No more Mr. Nice Guy for you, JT. You are hardcore, and what better way to put the nail in your boy-band image coffin than to go on record questioning both the vocal skills and heterosexuality of last season’s AmIdol winner? You are so. Fucking. Cool. Yo.

Regarding his raven-haired former flame, he says “I dated Britney half my life, but I donâ€™t know that woman anymore.â€ Okay. Memo to Brit: the win-him-back plan didn’t work. Cut your losses now.