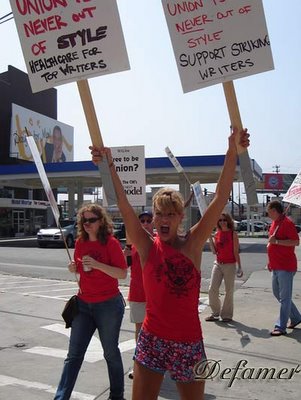 It’s a snarky headline, but truly, I love this girl. I think she was the best thing that ever happened to Top Model, easily the most talented person to ever grace that show, and I think she should have won the whole damn thing. So when she showed up to support the Top Model writing staff striking for union membership, I didn’t even roll my eyes at her pathetic attempt at further publicity. Unless you watch Real World, which I have (thank God) finally officially outgrown (I tried to watch Key West and I just couldn’t get through an episode, and I am so proud of myself for that), it’s rare these days for reality cameras to focus their sights on someone who is just so fucking drunk all the time. Remember when she talked to a fern? For, like, hours? About how neither of them really fit in anywhere? And then finally Tyra had to come in and give the girls a thinly veiled chat about “vices” and she was like “Do any of you have a vice? Do any of you drink, say, wine? Maybe a lot?” And Lisa raised her hand and Tyra was like “Yeah? Are you a wino?” and Lisa was like “Yeah,” and Tyra muttered some inane thing about how vices are something we all have to overcome and that, ladies and gentlemen, is how Lisa D’Amato’s alcoholism was nipped in the bud thanks to Tyra Banks and the deserving writing staff of America’s Next Top Model?

Yeah. That was so awesome.

Hey, Lisa, remember how you spent a good part of last year being billed as America’s Drunkest Girl Ever on national television? Remember how all the stupidest and most embarrassing things you said and did while getting totally wasted, alone, in front of a bunch of sober and clueless 18-year-olds was broadcast week after week, captured for time immemorial, for the consumption of the entire country and a smattering of overseas markets? You know who you have to thank for that? You know who made damn sure you looked your very worst every single episode?